The Academy of Change Forum ends: two days of inspiration and encouragement 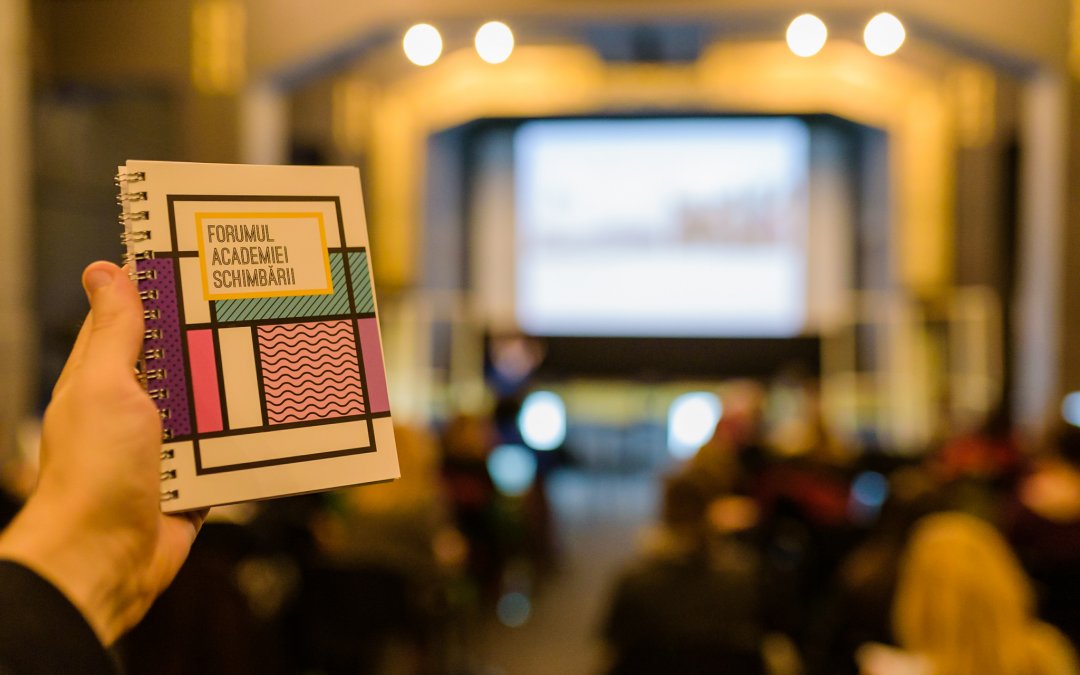 The first edition of the Academy of Change Forum took place between November 18-19 at Cinema ARTA and ClujHub, on the theme From public development to cultural mediation. Organized by the Cluj Cultural Centre, the Forum aimed to bring together culture and education professionals for 2 days to explore the space between culture and the public, good practices and tools that inspire and challenge them to rethink their relationship with the public. The first day was dedicated to presentations and discussions about public development and cultural mediation.

Following the introduction by Corina Bucea, project manager at the Cluj Cultural Centre, Maria Kovács (Noi Orizonturi Foundation) has proposed a re-framing of the school image in order to provide children with a more fulfilling learning experience. Moreover, during the presentation Where is there (still) room for culture and art in school programs?, Maria Kovács launched the idea that school should be the place where the children’s happiness is central. Irina Bălan (Asociația 37) spoke about the Contemporary Art Circle she coordinates in Târgu Ocna and about the Bauhaus Play project: original artistic exercises in the school, which brought together students, artists, designers, craftsmen, but also parents and teachers. Under the inspiration of the Bauhaus spirit, which encourages openness for community and dialogue, the class of a school in Târgu Ocna became a test lab for various artistic techniques, but also for working with unusual, recycled materials.

During the What is behind the data about the cultural public?, Session, Anda Becuț Marinescu (National Institute for Cultural Research and Training) presented a brief summary of the most recent edition of the Cultural Consumption Barometer in 2018. Among the data that have drawn the participants’ attention we count the increased participation of young people in cultural events, the socio-economic profile of the public, and the relationship between cultural infrastructure and participation in cultural life.

Rarița Zbranca, program director at the Cluj Cultural Centre, emphasised the importance of research in order to be well anchored in the realities of public relations, stressing the idea that it is important to contribute to the development of cultural education and that art and culture can have a real impact on education in schools.

Delia Popa opened the session With the public, not just for the public. Inspiration from the field of cultural mediation with a presentation on the methods of cultural mediation that she implements within ArtCrowd – Artists in education. Delia spoke about the dynamics between her identity as mediator and artist, about how the two roles nourish each other and about the methods she uses to introduce contemporary art to both children and adults.

Svetlana Cârstean and Ana Maria Sandu presented their experience in various schools around the country, travelling with the Reading Incubator, and shared the joy of meeting teachers who will continue what they started together. The children’s interaction with literature has a real effect on learning since they use texts that develop critical thinking in their reading workshops.

Anca Caramelea spoke about the CinEd film mediation program, which tries to provide a solution to young people’s restricted access to European cinema and to mediate the knowledge of the world through film. The methods presented include visual associations, syntheses and descriptions, scene reconstruction, visual brainstorming, creating story boards and movie posters.

Mihaela Tilincă and Irina Mureșan presented the approach of the mediation program developed by the Contrasens Association in collaboration with the ArtEncounters Biennale, Timișoara. Mihaela started from the premise that contemporary art is a pretext for self-knowledge and learning, knowledge of the world, of the other, of the community, presenting the different types of activities developed within the program (Re)knowledge Itinerary. Irina introduced us to the Artful Thinking working methods.

Selma Dragoș believes that mediation in schools should focus on the quality of interaction with children and not necessarily on the large number of children included in a program. Selma explained how she chose to develop her activity at the Traian Dârjan school in Cluj, as an artist in residence in the project Art in Play, developed by the Cluj Cultural Centre.

The second day of the Forum included workshops and working sessions with cultural and educational professionals, an opportunity to learn and exchange best practices in the field of cultural mediation.

The workshop facilitated by Anca Caramelea (CinEd) focused on the distinction between film education and education through and started from the presentation of several initiatives in this field in order to build a broader vision on some ideas of programs that can be developed in the future. Among the proposals made during the workshop we mention creating a film education manual.

The workshop moderated by Paula Nuțaș, How can we find a common language between teachers and artists? focused on mutual listening between teachers and artists and on identifying potential areas of collaboration between educational and artistic fields. In the dialogue between the two fields, we debated ways in which each partner can preserve their autonomy and find their place in programs that bring together art and school, respecting the needs and using the potential of the educational system but also that of the art of acting complementarily. Another session dedicated to the dialogue between school and culture was facilitated by Ioana Hanchevici, who continued the conversation between the participating teachers and representatives of the School Inspectorate, and artists or representatives of cultural organisations, who presented their work experience at the intersection between culture and education.

The workshop How prepared are cultural organisations for the special needs public? Facilitated by Ruxandra Mateescu dealt with types of approaches regarding disability that can define how cultural organisations relate to the public with special needs. Ruxandra shared her own experience as a parent concerned about the cultural participation of children with special needs and challenged participants with practical exercises meant to offer solutions to challenges related to accessing cultural events. At the end of the Forum, the workshop led by Corina Bucea was a brainstorming session on current practices in the field of cultural mediation, in which we explored examples of best practices that can inspire us in our projects.

More than 60 people participated in the Academy of Change Forum: cultural managers and mediators, representatives of museums or cultural institutions in Cluj, teachers, students or other professionals who activate or are interested in the field of cultural mediation.

“The Academy of Change Forum was about inspiration and encouragement – we brought together people who, in schools, museums, cultural spaces, small or big cities, carry out wonderful projects that bring children and adults closer to art and culture. We were inspired by their ideas, by their projects, but also by the aspirations in which they stubbornly believe, and seeing so many participants interested in cultural mediation and passionate about their work, we all received the necessary encouragement that what we all do in this field is necessary and has a real impact. One thought that stayed with all of us is that we need this meeting ritual at least every year, so we are already thinking with excitement about the next Forum,” said Corina Bucea, project manager at the Cluj Cultural Centre and organiser of the Academy of Change Forum. 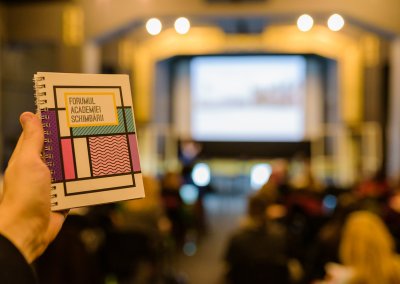 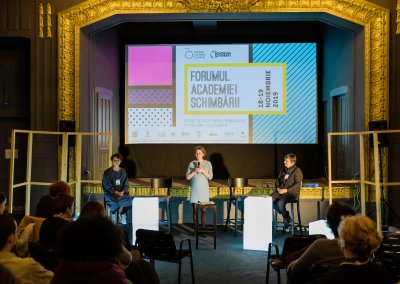 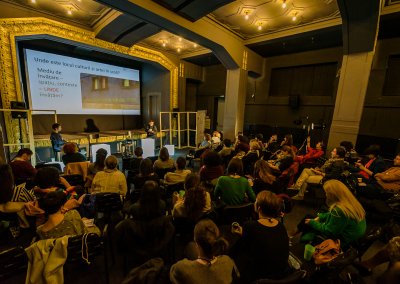 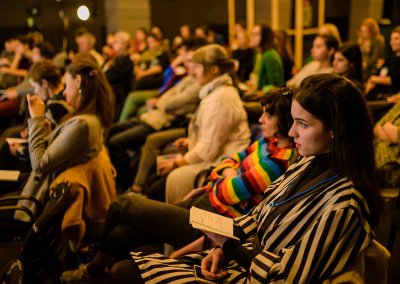 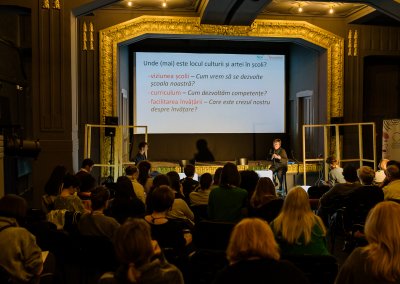 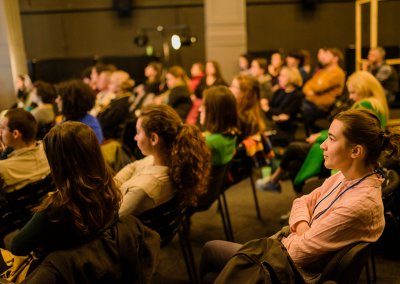 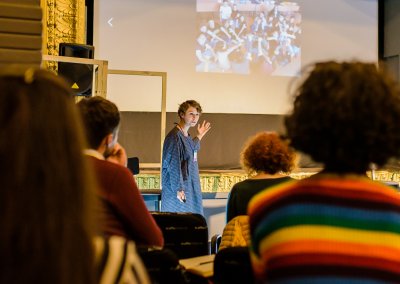 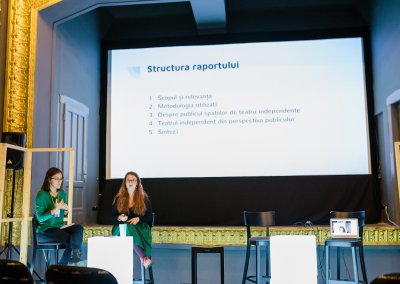 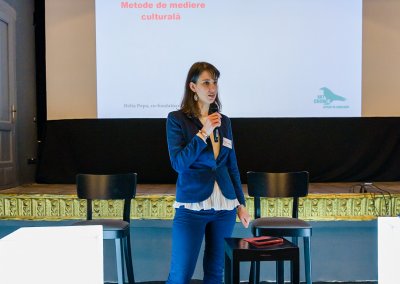 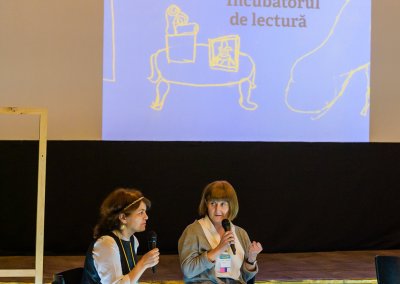 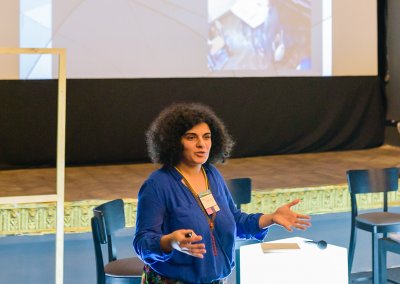 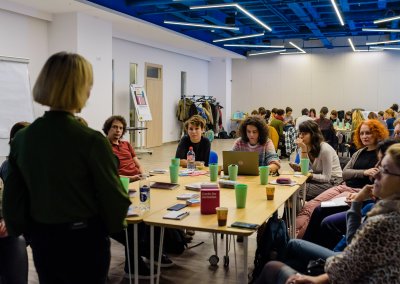