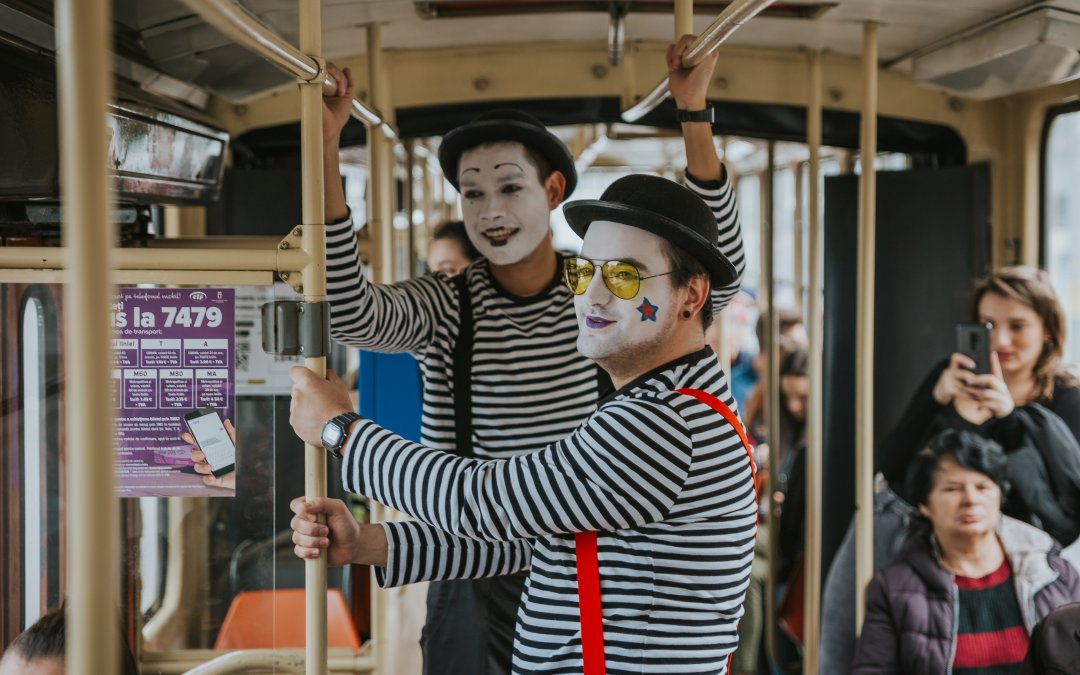 As part of the “Art in Motion” campaign, the partners from Creat.Act.Enjoy have carried out an initiative in the student dorms but also on the street and in the buses, meant to encourage the public to use public transport and to remind the travellers about the good manners on the bus. With a smile on their lips and plenty of ingenuity, the two actors Paul Sebastian Popa and George Sfetcu told me what their impressions were.

Cluj Cultural Centre: What did the “Art in motion” project mean to you?

Paul Sebastian Popa: For me, the project “Art in motion” meant a reminder, both for me and for the others, of the civilised behaviour in society and of the respect towards the others.

George Sfetcu: The project represented a challenge because the space was new, the time interval was one in which the buses were crowded and our expectations were high. However, I can say that in the end I gained experience and opened a channel of communication with many travellers, which satisfied our expectations.

Cluj Cultural Centre: What was the people’s reaction?

Paul Sebastian Popa: They were very responsive to our challenges. They easily joined our game “getting on the bus in 3 steps.” First step: we wait on the side of the door, step two: we wait for people to get off, step three: we get on and validate our ticket.

George Sfetcu: Surprisingly good reaction from people. The youth, the students already knew how to get a bus pass and they were open to our approach, which made us glad. I did not feel rejection from the passengers; on the contrary, their involvement was exemplary.

Cluj Cultural Centre: Do you have a more unusual story from the project?

Paul Sebastian Popa: Yes! I think the most special encounter during these past four days was the last one, when, at a bus stop, I met a group of children, who joined our game of getting on the bus. I think it was the most fun ride on our imaginary bus in the four days of “Art in motion”.

George Sfetcu: An unusual encounter was when a group of children took part in our demonstration “How do we board the bus correctly?”

Cluj Cultural Centre: Do you use public transportation? Did you use it when you were a student? Do you find it important to use it?

Paul Sebastian Popa: Yes! I used it daily as a student and nowadays I use it as many times as I need to and I need it very often. I think it is important to use public transport, because this way we pollute the air less and I think that in some cases we even reach the destination faster. For example, I combine the bus with the scooter. I ride my scooter to the bus stop, I take the bus to the stop closest to my destination, get off the bus and continue my journey by scooter.

George Sfetcu: Yes, I’ve been using public transportation since I was a student. I only use the car when I leave the city. I think it’s important to have as many bus lanes as possible.

Cluj Cultural Centre: Do you remember the first time you used public transport in Cluj? Has anything changed since then?

Paul Sebastian Popa: The first time I used public transport in Cluj was when I was 6. I only remember I took the tram and I was fascinated that a mini train was running through the city. But more recently, I remember the day I came to enrol in university. It was hot, crowded and you could only buy tickets from a small counter where the lady was in a hurry to give you the change so you wouldn’t miss the bus because of her. We’d punch the tickets in those ticket punchers that were all over the bus. Today it’s much easier. The buses are big, they have their own lane on the road, they have air conditioning and you have 4 options to get a ticket.

George Sfetcu: I used it 10 years for the first time, there were old buses, the tickets were cheaper, but they didn’t have the conditions that the buses have today.

The “Art in Motion” Campaign was initiated by the Urban Innovation Division of the Cluj Cultural Centre, with the support of the City Hall of Cluj-Napoca and the County Council. Main partner: Banca Transilvania